The purpose of the Density and Diversity Done Well competition was to:

The ‘missing middle’ is a term used to describe dwellings between high-rise, high-density living and free standing, suburban family homes. Queensland has traditionally been reluctant to explore and widely implement.

It was open to multidisciplinary teams that included architects, building designers, planners, landscape architects and urban designers, and attracted 100 submissions from across Australia.

The challenge posed to competitors

The winning entries cover a wide variety of building types from micro-housing through to compact apartments. They clearly demonstrate the ‘missing middle’s huge potential for both variety and capacity to house more people in the same place with good amenity. My ‘thin’ idea creates meaningful front and back yard spaces, a shared street room and a space for social outdoor activities.

Increases the number of dwellings on the neighbourhood block from 20 to 40.

This proposes a well-crafted, low-scale intervention into an existing neighbourhood. The idea centres on the creation of a narrow house that re-purposes an often unloved, underutilised and contested ‘leftover’ space between the side boundary and an existing house.

It creates a series of small building footprints within this side boundary space that could also accommodate a flexible studio space, granny flat and home offices as a separate freestanding extension to the existing house. This approach encourages neighbourly interaction. It allows work to proceed affordably and organically, without excessive capital cost and unnecessary demolition.

Increases the number of dwellings on the neighbourhood block from 20 to 52.

Jury comments: Building under and behind

This is a deceptively simple, compact and affordable idea that retains and builds under the existing house while placing two micro-dwellings out the back. It demonstrates what is possible when people, not cars are invited into backyards.

The grouping of micro homes clustered around a central courtyard space lends itself to co-housing or intergenerational family situations, particularly where facilities such as laundries, sheds, and spaces for cars and vegetable gardens are shared and valued over privacy between dwellings.

This low-key approach also allows for incremental change and a simple financing model, particularly for owner-occupiers. My idea is about small footprint, carbon neutral and energy efficient living, which unlocks the value in our own backyards.

Increases the number of dwellings on the neighbourhood block from 20 to 70.

This idea creates a series of contemporary and compact laneway pavilions that utilise lightweight modular construction. The jury was impressed with the attention to detail and incorporation of a range of energy and water efficient ideas, as well as flexible floor plan arrangements providing a choice in intergenerational and live-work opportunities.

The self-contained nature of each pavilion, including the retention of off-street carparking, makes this an attractive model for ‘downsizers’ who want freehold, villa-style living.

The freestanding nature of each pavilion allows each building to capture light and breezes on all four sides – important in our subtropical and tropical environments.

This approach also provides the possibility for sub-staging and incremental take up that is not often an option with other higher density housing types. 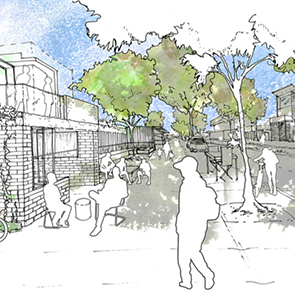 The typical Queensland Street is oversized and car dominated. I want to create a place to pause, chat to a neighbour or have a cup of tea while observing new life on the street.

Increases number of dwellings on the neighbourhood block from 20 to 80.

This idea accommodates up to four dwellings on a typical block by building within the area traditionally used as the front boundary setback and in areas free of mature trees.

In this scheme, the front gardens are replaced by buildings that offer a street presence to studios, workshops or home offices.

Taking a cue from the traditional shop-house this scheme includes studio apartments above these work-spaces. 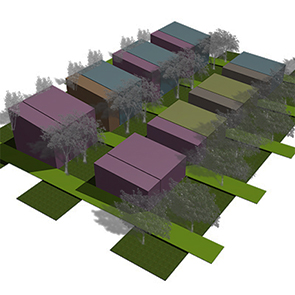 Our idea fulfils the requirement for achievable and affordable solutions, with minor disruption, great variety and flexibility all on a 600sqm block.

Increases the number of dwellings on the neighbourhood block from 20 to 80.

The demolition of a post-war house and the subsequent subdivision into two smaller lots is a common sight in many suburbs. Seemingly overnight large project homes soon consume these sites, offering little in the way of amenity and open space.

By carefully arranging two asymmetrical duplexes on the site, this highly resolved proposal achieves a scheme of equal density but in a far more design and climatic responsive way.

The jury considered this a flexible and deceptively high increase in density. The concept does require some repositioning of the traditional access patterns. Choosing to accommodate cars on the periphery of the site has allowed the design to focus on fine grain pedestrian circulation from the street to the front door. With a range of shared amenities, this large house retains the ‘luxuries’ of traditional suburbia: the backyard, the shed and a generous covered outdoor BBQ area.

Increases the number of dwellings on the neighbourhood block from 20 to 100.

This idea reimagines the suburban McMansion as a private community of 4-6 dwellings of differing size and type, including a communally owned bedsit for visiting family and friends and car-sharing arrangements. The concept also challenges the traditional scale and function of the street by proposing car and community spaces through the reduction of traffic lanes and asphalt.

The concept merges three sometimes-maligned housing forms – the six pack, the McMansion and the share-house – into a new flexible built form that offers a place to live for singles, couples, small young families, established families and empty-nesters.

The jury saw great potential for this model to house the young and the young at heart, particularly elderly people or people with a disability who wish to live in a contemporary, non-institutional community-style setting. Our design looks to the under-utilised backyard and the creation of a new subtropical laneway.

Increases the number of dwellings on the neighbourhood block from 20 to 100.

An urbane and compact apartment that builds on the traditions of the ‘six pack’. This is a higher density solution that proposes an integrated access space and allows for the build-up of density over time.

This scheme cleverly deals with car parking and the building form in a narrow space. The building height increases towards the centre of the block and to the laneway thereby reducing overshadowing and overlooking often associated with these types of incremental infill. Increases the number of dwellings on the neighbourhood block from 20 to 40.

An energetic and enthusiastic collection of ideas that creates a strong urban pattern radically at odds with the traditional high density offering. This scheme builds on the idea of the gable and skilfully integrates this with contemporary green roof terraces and new forms of living.

A strong connection to the streetscape is promoted through the design with areas for social interaction located on the traditional front setback and footpath areas.