Paul Martyn leads the Department of Energy and Public Works (EPW).  With more than 25 years’ experience in economic policy and reform, Paul is leading the development of Queensland’s plan for the energy transformation.  He is responsible for policy around the building and construction industry, and for improved government procurement.  His department, with over 2000 staff, delivers major building projects across Queensland.

Prior to joining EPW, Paul was Chief Executive Officer of Trade and Investment Queensland, where he spearheaded investment attraction in hydrogen and renewable energy.

Paul has worked to encourage growth and investment in a wide range of Queensland’s key sectors, including resources, agriculture, manufacturing, tourism, defence industries and high technology – and now energy and building.

In the Governor-General’s 2022 COVID-19 Honours List, Paul was awarded a Public Service Medal for his leadership of Queensland’s COVID-19 Response and Recovery Taskforce during the pandemic. Graham has vast experience in the building and construction industry, spanning a number of decades. Graham has contributed to the Executive Leadership Team in his role as Deputy Director-General since joining the department in July 2011.

In this role, Graham has led the State’s primary building and construction service provider to deliver major projects, building maintenance, and facility management services for client agencies and departments.  With offices across Queensland, including regional and remote communities, he has been strongly focused on developing an agile, flexible workforce while driving a ‘customer’s first’ culture.  In addition, Graham has worked collaboratively with industry stakeholders to deliver on key legislative reforms for the building industry.

Graham has held senior executive positions within other government departments, including Deputy Director-General of the Department of Education and Training, where he was responsible for infrastructure planning and delivery. Graham holds a Queensland Open Builders Licence. Irene was appointed as Deputy Director-General, Corporate and Portfolio Strategy in May 2022.

Irene has over 20 years’ experience working in state and federal governments, largely focused on policy-driven service transformation and delivery. She has a keen interest in ensuring programs are people-centric and that digital technologies are leveraged to enhance service delivery.

Irene has led large-scale programs in the Department of Communities, Housing and Digital Economy and Department of Employment, Small Business and Training. She has led Queensland Shared Services, modernising and optimising the shared services used by agencies and departments. Irene has also held several senior executive roles at WorkCover Queensland, with responsibilities for corporate services, customer services and specialist advisory teams, and was a member of the Workplace Health and Safety Board of Queensland.

Irene brings a wealth of experience in customer service and design, digital transformation, and management of strategy, program and service delivery. Sharon joined Department of Housing and Public Works in April 2019 and brings extensive policy implementation experience across Federal and State jurisdictions of government.

Most recently, she spent 7 years with the Australian Government, undertaking both corporate and policy roles within the Department of Social Services. This followed numerous economic and social policy roles across the Queensland Government, including the Departments of the Premier and Cabinet, Public Works and Families and Communities. David was appointed as Deputy Director-General of the Energy division in August 2021.

In his previous role as Executive Director in the Energy division for four years, he worked in multiple roles including Strategic Policy and Renewables. Prior to joining the Queensland Government, David worked in both the resources sector and in the media. 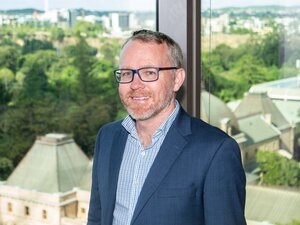 Chris joined the department in March 2022 to lead our work with partner agencies in accelerating hydrogen as part of a new energy system for our state.

In his previous role of Executive Director, Georesources Policy for the Department of Resources, Chris provided strategic direction for Queensland’s resources sector, including regulatory reform and industry development. He also played a lead role in the development of resource sector COVID-19 pandemic responses and government support and recovery measures. Chris also previously played a lead role in onshore gas industry reform with the Northern Territory Government and has held senior roles in the private sector. Paige’s 30-year Queensland public sector career has seen her working across a number of portfolios including infrastructure and planning, main roads, racing, national parks, social policy, and sport and recreation. She is known for her experience in successfully leading transformation within government through community collaboration and and a strong focus on creating better futures for Queenslanders. With over six years in executive roles in the Queensland Government, she has extensive experience in leading business divisions and directing teams to achieve high-level outcomes in strategy, policy and program development and delivery.

Paige has served on a range of community boards and committees and is well-versed in engaging with diverse stakeholders, as well as Government Statutory Authorities and Committees to achieve mutual outcomes. In her previous roles as Assistant Director-General, QBuild, and Assistant Director-General Sport and Recreation, Paige led the QBuild Transformation Program to enhance delivery of building of government infrastructure assets and led the delivery of the Queensland Government’s Activate! Queensland 2019–2029 sport strategy.

Paige brings her many years of experience as an athlete, coach and administrator, as well as her background in multiple sectors of the leisure industry, to the work environment by applying the principles of high performance, training and teamwork Ainslie was appointed as Assistant Director-General, Building Policy in April 2022 after acting in the role since September 2021, bringing many years of strategic leadership experience within public sector environments. Prior to commencing in this role, Ainslie was the Executive Director in Building Policy.

As the Queensland Government’s representative on the Australian Building Codes Board, Ainslie works with officials nationally on matters relevant to the building portfolio.

Ainslie has 20 years’ experience in state and federal government, including working with a national employer association. Ainslie has extensive central agency experience and has worked on significant economic and social policy portfolios developing and delivering high priority reforms for the Queensland Government. Her work is supported by academic qualifications including a Master of Public Policy from the Australian National University. Paul was appointed Assistant Director-General of QBuild in May 2022. Prior to this, he spent 12 years with the Queensland Police Service, the Public Safety Business Agency and Queensland Fire and Emergency Services where he worked in the Asset Management and Capital Program divisions.

Starting his career as an apprentice carpenter in Cairns, Paul has 40 years’ experience in the building industry, mostly in government roles. After working with local builders across the region he joined the then State Works Department as a carpenter, quickly progressing to Supervisor, Senior Supervisor, District Manager, Regional Manager and Client Services Director working on Thursday Island and in Bamaga, Roma, Mount Isa and Toowoomba.

Paul has extensive experience in building contract and strategic asset management and remote area service delivery.  He has managed large and diverse teams, working in challenging and complex environments. He is a recent graduate of the Australian Institute of Company Directors.